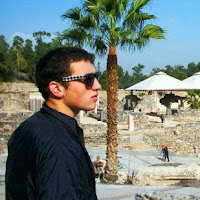 R.K. Gold is an award winning novelist from Buffalo, NY. He graduated from the University of Maryland with a Bachelor's degree in English and Literature and has appeared in over a dozen literary journals and magazines. His novella Just Under The Sky won the People's Book Award in December 2015. His collection of short stories, The Little Black Book, reached #7 on the Kindle top 100 short reads list in July 2015. His influences range from traditional American writers and poets like Ernest Hemingway, Langston Hughes, and Kurt Vonnegut, to pop icons like Alan Moore, Stan Lee, and Stephen King.

RK Gold: Just Under the Sky is a magical realism novella. The main character, Jasper, is 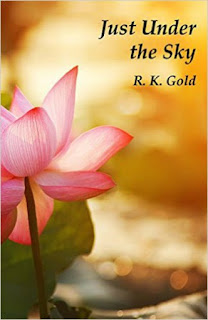 confronted with the reality that the distinct rules of good and evil he was raised to believe in are wrong. When abandoned in the forest surrounding his village, a place his people consider to be pure evil, Jasper realizes things in life are never black and white.

RK Gold: Just Under the Sky is published in both formats. You can find it in paperback on Amazon, Barnes and Noble, and Weasel Press’ website. Digital copies can be found at the same locations as well as Smashwords.

IAN: What inspired you to write Just Under the Sky?

RK Gold: I was living in Montana at the time. Being around that much natural beauty was impossible to ignore and rubbed off on my work. The first chapter started as a bit of a joke. I did not have much intention to finish the manuscript, let alone edit it and pitch publishing houses. But as I developed the history of the forest and the rules of its existence, my desire to finish became insatiable.

RK Gold: Throughout the entire text Jasper looks up at the sky to use it as a sort of gauge to figure out how deep into the forest he is. There is one scene in the book where he stands over the clouds and looks out at the rest of the world. To him, all the answers are always up, and that moment was the first time they felt within reach.

RK Gold: What I came away with from writing this book, is that one of the most difficult things to do in this world is to question the lessons you learned growing up. I guess the lesson to learn is don’t be afraid to acknowledge you don’t know everything.

RK Gold: Stephen King without a doubt. I have a copy of his book On Writing on my nightstand. He’s just so prolific, and still somehow so modest. And though he’s a horror author I love how he can bring humor into the scariest moments of our life.

RK Gold: If I am being completely honest I would not be where I am today without Google. Whenever I have had questions about what my next step should be, or how to find a publisher, or tips on developing my brand, I would use Google.

RK Gold: Absolutely. My writing is my career. Whether it be articles, blogs, or books, I make my living from writing. It’s not something I do only when I feel inspired, it’s something I have to do every day. And the more I treat it as a job, the more I am rewarded with the perks of being employed.

RK Gold: Yeah, not sounding like an idiot. Sometimes I feel like I beat away at a point trying to figure out how to express it just right only to come back from a walk with my dog and realize a simple solution for the whole thing.

RK Gold: Finishing it. The closer I get to the end the slower I move. It’s the same with my most recent manuscript. I wrote the first 50 thousand words in only a couple weeks but the last 10 dragged on. I kept finding excuses to procrastinate because I would just tell myself “I can finish it later I’m almost done.”

RK Gold: My next book is another novella titled Brinwood. I am publishing with Weasel Press again, and the release date is set for this coming spring. Brinwood is a violent thriller following a man named Casper’s return to his hometown to rescue his sister from a religious cult.

RK Gold: When it comes to writing, treat it like a job. A lawyer wouldn’t be a lawyer if he or she only practiced law when they were feeling inspired. Put in the 9-5 hours and you will see the results.

RK Gold: Thank you so much for all your support. Your kind words have meant the world to me.
Posted by William R Potter at 3:35 PM