I grew up in Glasgow, Scotland, in a small rural village.  There wasn’t much to do if you couldn’t drive and weren’t old enough to drink, so I read everything in sight, but didn’t write.

I studied chemistry at the University of Oxford and then worked in international finance: based in London but travelling all over the world.  I loved my job, but when I was diagnosed with major eye issues I suddenly reevaluated my whole life – and began to write.

IAN: Please tell us about Death in Focus. 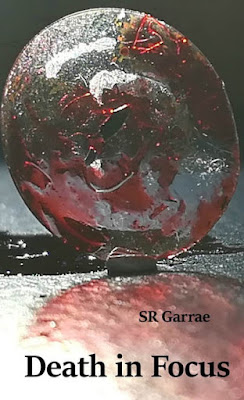 SR Garrae: Obsessive, famed and very sexy reality photographer Jamie Carval is desperate for a new exhibition to keep him in the public eye.  Dedicated, driven NYPD detective Casey Clement has a dead scientist and a multimillion-dollar motive for murder landing on her desk.  When their paths cross over the scientist’s corpse, Carval knows he’s found his new inspiration in the form of Casey and her misfit team: gigantic hayseed O’Leary; terse, ex-Army Tyler, and technogeek Andy.

But Casey hates photographs and photographers alike, and has troubles of her own to contend with alongside the murder.  The last thing she needs or wants is Carval tagging along behind her.

Although the rest of the team accept him, faced with Casey’s hostility but deeply attracted, Carval needs to prove that his photographs have value.  When the killer is cornered and lashes out, will he get his chance?

IAN: Is Death in Focus published in print, e-book or both?

SR Garrae: Death in Focus is available in Kindle and paperback forms, and on Kindle Unlimited.

IAN: What inspired you to write Death in Focus?

SR Garrae: I had been writing romantic crime fiction in the form of fan fiction for some 5 years, and I wanted to write my own characters rather than someone else’s.  The first character of my own was the enormous Detective O’Leary, who’d fallen wholesale into my head while I was on a business trip, and he really demanded to be a major (though strangely not the main) character.  Gradually, I added the others around him.

IAN: Did you use an outline or do you just wing the first draft?
SR Garrae: I have an outline, but although the main points are in place early, those are very broad: so perhaps ten or fifteen really key points.  As I write, I expand the outline to be a detailed summary of the plot, so that I have a short form record where I can check that case points have been covered and not left unanswered; and so that key emotional developments are realistic in time and not missed.  I also use it to add later details of plot points so that I don’t forget them, and then I use it to ensure that there’s a good balance between relationship, team and case matters – colour coding helps here!

IAN: How long did it take to write Death in Focus?
SR Garrae: Over a year, but I was also working in my previous career full time, so I didn’t have a lot of spare time to write.

SR Garrae: I hope they’ve enjoyed it.  I’d like them to feel that it was a good story which held their interest, and which had realistic characters with whom the reader could engage.

SR Garrae: Partially.  As a chemistry graduate, I had heard about scientific fraud, though I have never personally experienced it.  In my career, I saw plenty of financial fraud, and so that’s based on my own experience.  I’ve never been nearer the NYPD than walking past their cruisers on the streets of Manhattan, but they have an extremely helpful website and there is a lot of accurate information available if you take the time to research it.

SR Garrae: My friends in fanfiction, who criticized constructively, read my faltering first efforts, and helped to make me a much better writer, in particular those whom I’ve met in real life.  Top of the list is Daniela, who’s been there to help all the way as a critical reader.

SR Garrae: I’m lucky enough not to need it to be a well-paid career, but I do see it as a career.  It’s my second career.

SR Garrae: I always have to ensure that I write more dialogue. I have a tendency to go for narrative in first drafts, which is not nearly as engaging, so that’s a big point of revisions and editing. I’m getting better at writing it as a first option.  I also have to make sure that I don’t use “UK” phrases but American slang and word choices.  Fortunately, I have a lot of American friends who will correct me if I get it wrong.

SR Garrae: I did. I have no talent for art, but I had a very clear vision that I wanted: a lens with light coming through it, which matched the case, which was around the science of optics - and also referred to the main male character’s occupation – photography, both of which rely on light and lenses. Eventually, I managed to construct the set, and photograph it. That photo became the cover, and I added the title, author and blurb in a standard program.

SR Garrae: My next book is a sequel to Death in Focus, following Casey, Carval and the team as they hunt a murderer through the ugly underbelly of the world of modeling.  More of the team’s past secrets surface as the crimes hit far too close to home for more than one of them.

Posted by William R Potter at 6:32 PM No comments: