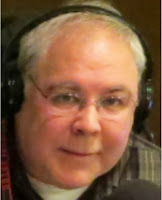 I enjoy writing about vampires that are unusual creatures with unusual tastes trying to find love in a hostile world. It’s a slightly different take on a familiar tale. A take where I try to bring the undead to life and make the unbelievable – believable.

I’m married to a wonderful woman for over 30 years who BTW has no interest in vampires.

Glenn Stevens: My latest book is titled Blood Relations – A New World. At its


core, it’s a story about survival, love, and lifetime friendships. The main character, Eros, is forced to flee his home planet to save his and his family’s lives from an alien invader known as the Scorpious, the true vampires of the universe. These beasts chase Eros across the galaxy to his new home and shoot him down causing his ship to crash into the earth. Eros manages to get off one last shot before crashing that causes the alien ship to crash as well. The crash costs Eros everything including his family and memory. This final event sets him up on a new journey of survival and discoveries.

The story follows Eros as he discovers himself and his strange appetite for certain types of blood. Over the course of book one, Eros becomes a sad multi-billionaire by building a mega resort that doubles as the largest blood donor site in the world. He creates a kind of Miracle Blood that heals all illnesses and extends lives. He’s sad because while he lives forever, all his friends and loved ones can’t. He sets out to discover the secrets of human life with the goal to extend their lives forever. 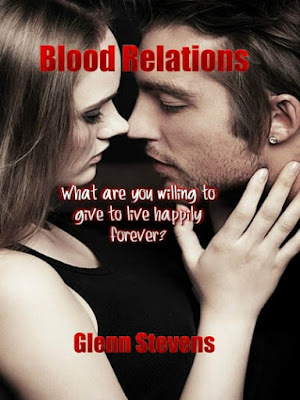 IAN: Is Blood Relations – A New World published in print, e-book or both?

Glenn Stevens: Available in print and eBook formats and soon audiobook.
eBook and Print at Amazon.com
Print at Barnes&Noble.com

Currently working with a narrator to offer an audiobook at Amazon.

IAN: What inspired you to write Blood Relations – A New World?

Glenn Stevens: A drive to portray vampires more humane and realistic. Showing a vampire bite scene with a deeper love and passion on both sides. I wanted to immerse readers into an incredibly wonderful world where they can escape, where anything is possible, where happiness rules and for good reason. Thanks to Blood Relations, such a world exists. The book has been known to increase even the reader’s own levels of Oxytocin – the hormone Eros is most after. So, keep a light on while reading!

IAN: Did you use an outline, or do you just wing the first draft?

Glenn Stevens: I winged it and discovered the story just like my readers.

IAN: How long did it take to write Blood Relations – A New World?

Glenn Stevens: 15 years. During the process two and a half books were written.

Glenn Stevens: First, a greater appreciation of life, of love and of friendships. The main hope is for readers to walk away with a smile, a little extra happiness in their hearts and a place they can come visit when they are feeling down. Blood Relations is part paranormal romance, part science fiction and part fantasy.

IAN: How much of the Blood Relations – A New World is realistic?

Glenn Stevens: A lot. Real vampires exist in the insect world so why not exist in other worlds? Look to spiders, ticks and mosquitoes for such examples. Mind control happens with parasites. People who die and come back talk about seeing the white light and tunnel and past loved ones. Even where the story goes into healing illnesses, such experiments are happening in labs across the world where scientists use viruses to change and repair DNA. My vampire aims for the jugular in his victim’s neck so life-saving venom can reach their heart first but before he can bite, he needs that jugular hard, so it doesn’t collapse. Hence why he gets his victims to lower their heads upside down off a table, couch or bed, to increase the pressure on that vein. It’s like what they do when donating blood. We don’t know if life exists out among the stars, but we can dream and speculate what that life might be. The possibilities are endless. If there can be a Darth Vader, there certainly can be a vampire like Eros.

IAN: How is your Blood Relations – A New World different from others in your genre?

Glenn Stevens: I tried to keep it fun and not gory. Some areas the story brings readers into sexy, passionate necking scenes where a bite is about to happen far deeper than most other stories and for good reason. I tried to make every scene and chapter worth a reader’s time and keep it as realistic as possible. There are vampire stories and then there are vampire stories! I also infused knowledge and humor into the story so readers walk away appreciating new things they might not have known before and hopefully feeling better.

IAN: Name one entity that you feel supported you outside of family members

Glenn Stevens: The Fan Story writer’s group with its large membership helped turn me into a better writer through peer reviewed edits, suggestions, feedback, encouragement and friendships. If not for the support of Fan Story I don’t know where I’d be. Fan Story also encouraged me to read more, review more and edit fellow writers and serve on select review panels.

Glenn Stevens: If Eros could grant me just one wish, this would be it. Writing sequels and new vampire stories is a dream job for me. I applaud those who have succeeded to make writing their career and hope to join them, but I also know such a career is hard to get into. I sure will keep trying though! I need to sell more books first and that means write books people want to read and listen to on audiobooks.

IAN: What was the hardest part of writing Blood Relations – A New World?

Glenn Stevens: Writing “The End”. My characters don’t die or ride off into the sunset. They continue to live every day with every day in paradise being another adventure!

Glenn Stevens: Yes, and I’m sure they have all heard it before - that is to keep writing and reading! Stay positive! Don’t be too critical of yourself and remember everyone is different, everyone has something different to write about and not everyone sees the same things you see. Be persistent and you’ll never let yourself down. Most of all, good luck!

Glenn Stevens: I’m writing a sequel to Blood Relations. The first book brings Eros from his former home to earth and it’s why the book is subtitled “The New World”. The sequel takes readers deeper into the story explaining more of Eros’s past, forcing Eros to confront repressed fears of the Scorpious, developing his new love interests with Lori, bringing back the Scorpious and defending earth from them, introducing a ghost and an incredible surprising ending that leads to another sequel among other things.

Posted by William R Potter at 5:13 PM No comments: