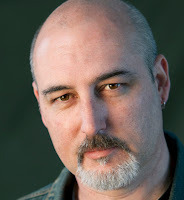 I live in Australia. A one horse sleepy town called Snake Valley, roughly 35 clicks south of Ballarat. You may’ve heard of it. Ballarat is famous for the gold rush of the mid to late 1800’s. I enlisted into the military at the age of seventeen, which the time I’d spent in there gave me much juice to write about. But after leaving the military, I spent my life doing average things and living an average life. Find a girl. Get in a rock band and do some gigs. Make some money and lose it again. Make mistakes. Make the same mistakes. Lately though, I spend time with my wife and my horses, and my manuscripts that mostly live in my head until I get them out into the world. I never had any big dreams for making it in the crazy world of the big time players. I just like to write and the process of doing it makes me happy. I also get a kick out of watching my wife’s face all curl up when she’s reading my latest drafts.

Carl Lakeland: Eagle Shield was supposed to be the prequel to Project Amber (My first book) 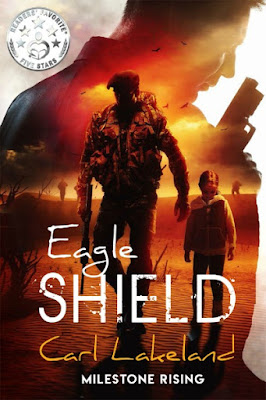 But I changed my mind and I now call it book #1. It is a military spy thriller. However, my writing style takes me to other places and the story can easily fit into other genres. Yes, it has blood and guts. A whole lot of profanity. I write honestly and I make no apologies. It’s not for everyone and I wouldn’t give it to my kids to read. (they’re now reaching their twenties…) And the story is set in Australia’s outback with all its wonderful locations, flora and fauna. It is very fast paced. And I wrote it with a purpose to be easy to read. Readers will be left panting for breath, so, there’s no point stumbling over complicated words when everything is cracking past, half the speed of light. I have put a lot of effort into giving my characters a voice all to their own. You’ll meet classic outback Australian individuals with their slang and dialect. You’ll meet city folk who speak with an educated tongue. You’ll meet soldiers, cops, intelligence officers, and even someone who is not from this world. If someone was to ask me to describe this story in one line, I’d say, “You’d bloody-well better put your seatbelt on…”

IAN: Is Eagle Shield published in print, e-book or both?

Carl Lakeland: Yes. Project Amber is in both formats now. Eagle Shield is in print at the time of this writing but will be in ebook very soon. I actually have a ebook on my desktop right now, ready to upload.

IAN: Where can we go to buy your books?

Carl Lakeland: You can grab a copy from links I have on my website. https://carllakeland.com There are too many buying options to list here. You will be spoilt for choice.

Carl Lakeland: I’ve completed a few writing courses before I wrote my first book. In fact, Project Amber was born out of one of the courses I graduated from. The answer to this question is, yes, I wing it. We call it ‘writing into the void’. I have at least attempted to be a good boy and ‘structure first’ but it never worked for me. But I must admit, for me at least, I already have an entire novel in my head before I start to write. Just the way I am.

Carl Lakeland: I didn’t have a title until I was well into both books. That’s one thing I tend to leave alone. The reason is that the title is something not to take lightly. A good title will help sell a book. Message to everyone out there, do not write a title straight away. It will come to you when you least expect it. Don’t get all hung up on it. That said, I think I read a book once that was actually called, ‘Untitled”. True.

IAN: What do you hope your readers come away with after reading your books?

Carl Lakeland: A feeling that never leaves. Or at least lasts a long time.

IAN: How is Eagle Shield different from others in your genre?

Carl Lakeland: I wanted to read a spy thriller set in Australia. About ASIO and ASIS. About lies and secrets. I couldn’t find one. So I wrote one.

Carl Lakeland: Ahem… If only I had the chance. But, I’ve been really into a book called The Hills of Mare Imbrium by Carleton Chinner. A fantastic moonscape sci-fi. Sci-Fi fans won’t be disappointed with this one. Let me tell you…

Carl Lakeland: The Australian Writers Centre. A great bunch of guys to hang out with.

Carl Lakeland: It’s a good question and as all writers are, we’re never completely satisfied with our final draft. There’s always something lurking. It’s a matter of letting go, I suppose.

Carl Lakeland: Yes. I was thirteen. I wrote a short story for a school competition. And I won. But I was never any good at reading. I was slow and still am to this day. Dyslexia. Even though there must’ve been a whole bunch of spelling and grammar issues, it was the story by itself that got the attention. My very first thriller, you could say. I was thrilled.

IAN: Who is your favorite author and what is it that really strikes you about their work?

Carl Lakeland: Mathew Reilly. No fluff. No bullshit. Just in your face writing.

Carl Lakeland: My covers were designed by Alisha at Damonza.com. But with my input and my choice of fonts. Later, Simon Critchell who was appointed by Aurora House changed a couple of elements. And I was still able to give my own input. I made sure the covers reflected what’s going on in the story. After you read it, you’ll make the connection with tiny clues of imagery included on the cover. I get most annoyed if I pick up a book to read and the cover is all wrong, not reflecting anything.

Carl Lakeland: The chapter called Presence in Eagle Shield. It was very hard and very sad to write. I was in tears as I wrote it. (Absolutely the truth.) I stumbled over it so many times. I even scrapped it and re wrote it. But every time I re wrote it, it ended up the same. It ended up just as hard to write as the others I attempted.

Carl Lakeland: The one thing I can offer is this. Don’t give up. Always believe. The universe gives only to believers. The more you believe, the more the universe makes things happen. Read lots. Write lots. And believe in what you’re doing.

Carl Lakeland: I briefly mentioned Project Amber which is book #2 and it is available now. Book #3 is now in the final stages of the first draft. The Lost Ones. This one is a little relaxed compared to Eagle Shield and Project Amber. And I’m afraid if I mention anything about this book, it will be a major spoiler. And I don’t want to give away any spoilers, folks.

Visit Carl Lakeland at his IAN Page for more about the author and his books.
Posted by William R Potter at 3:37 PM No comments: