B. Roman: The IAN Interview 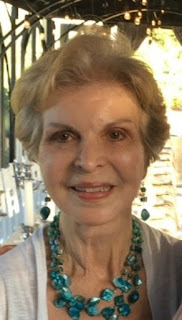 B. Roman (aka Barbara Roman) is the author of 6 books currently available through Creativia Publishing/Amazon and has been a performing artist for decades, as well as a writer of fiction and non-fiction. “Since childhood, I've been torn between two worlds:  writing and singing.  It's difficult to serve two masters, as they say, but I was compelled to do so.  When I was not singing, I was writing and vice versa. I've learned, for me, that one creative expression nurtures the other.  After writing non-fiction books and articles about the power of music to influence our lives, I embarked on writing fiction where music found its way as an integral part of the plot, particularly in my YA fantasy fiction and children’s stories.” While music and performing still hold a special place, Roman now focuses primarily on “writing the best fiction I can, and with each new book strive to meet my own high expectations.”

IAN: Please tell us about your latest book.
B. Roman: Actually, I have six books:  A trilogy of YA fantasy adventures, The Moon Singer series about a deaf teen who acquires three sacred artifacts that conjure up the mystical ship Moon Singer which transports him to places beyond this world where he creates transforming miracles for everyone he loves. 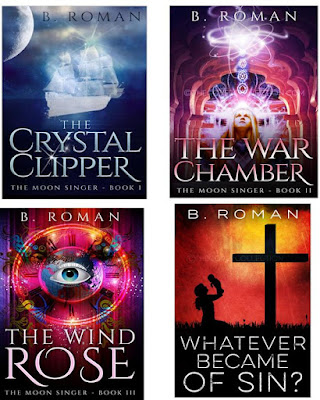 In contrast, there is Whatever Became of Sin? - a suspense thriller about a heinous baby-switching scheme rooted in greed, racial bigotry, and political conspiracies.

And two children’s books:  Hubert in Heaven - a hi-tech angel gets his wings about a hologram in a video game who is accidentally booted to heaven where he must find his purpose and earn his angel wings.  And my latest, Alicia and the Light Bulb People in Star Factory 13, a whimsical story - I call it a cosmic Alice in Wonderland -  about realizing your star potential through the magic of believing. 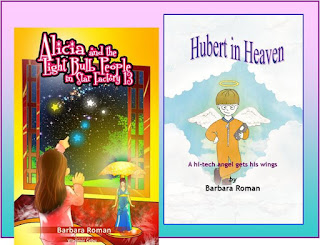 IAN: What format can we find your books published in print, e-book or both?

B. Roman: All of my books are available in e-book and print editions.  Hubert in Heaven is also produced in audiobook (Audible) format, with original music, sound effects and professional character actors.  Two books are available in foreign languages:  The Crystal Clipper is translated into Italian and Spanish; Whatever Became of Sin? is also in Portuguese.

IAN: What inspired you to write your books?
B. Roman: In The Moon Singer trilogy the emphasis is on deaf teen David Nickerson’s anger over his mother’s death and his feelings of abandonment.  He desperately tries to communicate with her through his crystals and his mystical time travel adventures.  After writing those 3 books, I realized there was one important story that was not completely told:  the story of David’s mother.  She is such an integral part of the Moon Singer books, and is David’s primary focus as he deals with many other issues that plague his family.  So I delicately pieced together her life story from her youth to her love affair with David’s father and her untimely death in a car crash - and then to the afterlife where she is faced with the challenge of accepting her fate or finding a way to return to her family.
IAN: Do you use an outline or do you just wing the first draft?

B. Roman: I don’t use an outline in writing fiction, unlike non-fiction which requires it.  I usually “hear” ideas in my head, throw them on paper, move them around, follow them where they go.  Eventually the story takes shape and must follow a structure. And I use extensive “comment” notes in the margin so I know where to add in more detail and make corrections later on.
IAN: How long does it take to write your books?

B. Roman: It took me about a year from start to finish, with many rewrites and refinements along the way.  Although I had the trilogy to give me a good deal of plot threads, I had to do deep research, especially on the afterlife and on classical music pieces (Billie is a classical pianist and her son, David, is a music prodigy). I’m not a very fast writer (because I also work a day job) and it took me about 30 years to write 5 novels, 6 children’s stories, two non-fiction books and 50 songs!  I’m currently working on a new suspense thriller; there’s about a year of work ahead of me on that.
IAN: Do you have a specific writing style?

B. Roman: I tend to write mostly in the present tense.  My novels all have large segments of flashbacks which are written in the traditional past tense.  I feel that present tense adds to the immediacy of the stories and the characters’ conflicts.  I also find it easier to segue between time periods this way. My style does have a “feminine energy” to it.  There is no explicit sex or overt violence in my books, and only a smattering of expletives (in the suspense fiction only).  My books also reflect my own personal feelings about ethics, the environment, compassion toward others, and a metaphysical belief in some higher power within ourselves that we can all invoke; I do my best to weaves these and other philosophies into entertaining stories without being heavy-handed or proselytizing.
IAN: What do you hope your readers come away with after reading your books?

B. Roman: I hope they find that, with all the amazing stories and writings about the Afterlife, how it differs from what we have heard and read; to realize just how much power spirits have over their own destiny.  Of course, one must suspend all disbelief when reading about such things, and embrace the “Impossible” as “possible.” As a writer, my goal is to appeal to a higher consciousness, everyone’s search for life’s purpose and meaning.  I believe readers love magic, mystery, seeing ordinary people in extraordinary situations, selfless acts of heroism and courage.
IAN: What books have most influenced your life most?

B. Roman: I’m what I call a “head in the stars, feet on the ground” kind of person which I guess explains my intense interest in spiritual/metaphysical issues on the one hand, and in contrast, a penchant for suspense fiction with a legal/political bent. Although not similar to my books, I have been inspired by metaphysical fantasies like “The Alchemist,” “Little Prince,” “Jonathan Livingston Seagull,” etc. because of their ethical and philosophical components. I like John Grisham books, legal and political thrillers, plot driven novels with lots of twists and surprises. And just good family sagas like “The Thornbirds,” and Anne Perry’s magnificent Victorian mysteries.

B. Roman: Winter’s Tale by Mark Helprin - a daunting book to read (700+ pages) because of its lyrical beauty and exquisite detail. All in all, it is a timeless love story ensconced in a glorious fantasy.
IAN: If you had to do it all over again, would you change anything in your latest book?

B. Roman: At this point, no.  However, ask me in five years. As I go back and read each book, there will probably be lots of areas I could improve or expand on.  But I can’t think about that now. It’s written, it’s done and I move on.
IAN: Do you recall how your interest in writing originated?

B. Roman: I can’t really recall when it happened, because I began writing little essays and poems in grade school.  I read voraciously as a kid: poems, novels, the Great American plays, fiction and fairy tales.  Maybe it was my love of lyrics - I knew about 1,000 songs by the time I was 14, and can remember all the words today. I started writing songs and lyrics at a young age as well. Eventually the interests melded together, and I’ve written songs for my children’s books that would probably make wonderful sound tracks! (a dream of mine)
IAN: Who designed the book covers?

B. Roman: The covers for my novels were created by Cover Collection, but are a collaboration.  I find an image that I feel represents the content of the book and the designers work their magic.  My children’s books were illustrated by artists I found on Fiverr.  I’ve also had all of my book covers animated (gifs and videos) by C.K. Dawn Animations.
IAN: What were the challenges (research, literary, psychological, and logistical) in bringing your books to life?

B. Roman: All of my books entail intense research.  Sometimes pages and pages of research just to write a paragraph so it is credible.  Even writing fantasy - magical realism, for example, you can’t just make everything up; a basis in “fact” helps make the story substantial.  I have to be “in love” with a story and my characters.  They must compel me and hold my interest from start to finish.  I haven’t a clue how to write for “the market” which changes as we speak.  I think my strengths are my love of the story, finding where the heart is and the universal emotions that might also appeal to readers.  My weakness could be that I write short books - about 150 pages - because endless narrative and detail is not my milieu, which I admire in other writers.  Maybe it’s my fascination with stage and screenplays - they get to the point, tell the stories, reveal the characters and come to a satisfying conclusion fairly quickly.  I could never write a 700 page book.  I’m not sure I have that many years left and I have many stories yet to write.
IAN: Tell us about your next book or a work in progress. Is it a sequel or a stand-alone?

B. Roman: My WIP (soon to be published) is called, “Before the Boy” and is a chilling prequel to the inspiring Moon Singer Trilogy. The plot theme: Even in death a mother guides her son through triumphs and tragedies to his true destiny.

Billie Nickerson must accept her own mortality as the only way she can assure her son will receive the intuitive gifts he was born to inherit, to save her family - and perhaps the world - from a disastrous fate. But learning that she has died too soon creates a Karmic crisis as Billie tries to escape the afterlife and return to her loved ones.  Though Billie’s life is fraught with danger and dark spirits, and the power that her son David acquires places him in grave jeopardy, the story is an illustration of a mother’s love and devotion that transcends the boundaries of the here and the hereafter.

Posted by William R Potter at 10:31 AM No comments: