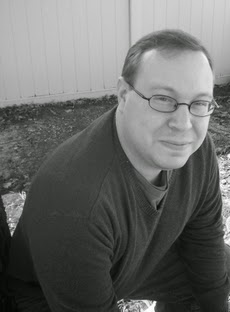 Charles Yallowitz was born and raised on Long Island, NY, but he spent most of his life wandering around his imagination. One day he returned from his fantasy world and decided he would share his stories with others. Eventually his wife decided that she was tired of hearing the same stories over and over again, so she convinced him that it was time to follow his dream of being an author. Now, locked within the house under orders to shut up and get to work, Charles brings you Legends of Windemere. He looks forward to sharing all of his stories with you and his wife is happy he finally has someone else to play with.

The Independent Author Network. Please tell us about your latest book.

Charles Yallowitz. My latest book is part of my ongoing fantasy series, Legends of Windemere.  This series follows the adventures of Luke Callindor, a young warrior who is determined to be a hero like his ancestors.  He is has more courage and bravado than common sense, which puts him in the path of a Lich and its dark master.  As the series progresses, Luke makes friends with other young heroes and learns that the gods of Windemere have big plans for him.

In their most recent adventure, Family of the Tri-Rune, Luke and his allies return to the city of Hero’s Gate.  It has been plunged into chaos due to his friend, Nyx the Caster, having unleashed a forbidden spell in the city’s defense. Now they must survive thieves, goblins, and a new breed of undead born from Nyx’s magic. Ghosts from the past are waiting in Hero’s Gate, but the most dangerous thing might be the revelation that one of our heroes has been living a lie.  It all builds up to a cliffhanger ending that leads right into Legends of Windemere: The Compass Key.

IAN. Is Family of the Tri-Rune published in print, e-book or both?

C.Y. All of my books are in eBook and Paperback.

IAN. Where can we go to buy the Legends of Windemere series?

IAN. What inspired you to write the Legends of Windemere series? 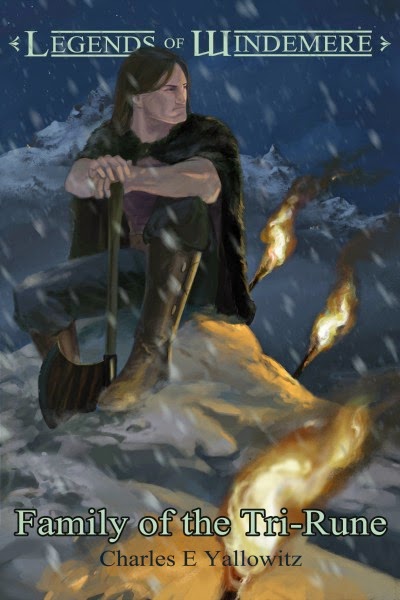 C.Y. I’ve wanted to be an author since high school and I was always drawn to fantasy books.  I started designing my own world when I went to college and continued my hobby of Dungeons & Dragons.  During one of the sessions, I thought of how I could use the characters for my books and the game could act as a testing area for storylines.  Everyone agreed it would be fun to play a game that turned into a published series, so I outlined the stories as we went and let my world grow around the new concept.  I quickly learned that I couldn’t use everything and alterations had to be made between the two mediums.  The game ended around the halfway mark of the plot, which left me to work on Windemere without the pre-existing material.  I took a little bit from everywhere and nowhere to create the world, characters, and stories and it’s become very different from the original inspiration.

IAN. Do you use an outline or do you just wing the first draft?

C.Y. I’m a big planner when it comes to my stories.  I have notebooks filled with character bios, monster write-ups, magic items, and whatever else has come to my mind over the years.  Part of this is because for about 10 years, I could only find time to outline future stories or edit what I finished.  Any idea that came to my mind was pursued during lunch breaks.  It eventually reaches a point where I have breakdowns of ‘chapter targets’ in a traditional outline format.  All that being said, these plans tend to get drastically changed once I sit down to write the actual book.  For example, I’ve occasionally found a chapter that can be absorbed into another or I switch characters for major events because the original choice wouldn’t be involved.

IAN. Do you have a specific writing style?

C.Y. I write using present tense third-person with a lot of action and dialogue to bring out the characters.  This style limits the amount of exposition that I can do and any world history has to be explained through conversations or a prologue.  I won’t deny that writing in present tense causes some confusion because most people aren’t used to it.  The funny thing is that I honed this style by accident.  I used to mix up present and past tense all the time when I was in high school.  A teacher told me to pick one, which ended up being present tense.  Nobody ever pointed out that it was an uncommon style, so I’ve been using it ever since and now it’s where I’m most comfortable.

IAN. How did you come up with the title?

C.Y. A lot of trial and error for the series and book titles.  Calling my first book Beginning of a Hero was the easiest since it’s where Luke Callindor sets off to become a hero.  The others all went through various titles due to the focus of their stories changing.  As for the series itself, Legends of Windemere has an epic saga feel to it and reveals the scale of story.  Windemere came about when I was sitting on a lakeshore trying to think of a name for my world and the wind was really strong.

IAN. What do you hope your readers come away with after reading your books?

C.Y. I write to entertain, so I always hope that my readers come away feeling like they went on an adventure.  I’m always hoping to hear about favorite characters and scenes when someone tells me they read my book.  If someone walks away with something deeper than a joyful smile then I see that as extra.

IAN. How is Family of the Tri-Rune different from others in your genre?

C.Y. It comes down to the world and a focus on characters.  I see a lot of modern fantasy heading away from magic, monsters, and quest-based stories.  There is more interest in political tales that are closer to reality than those with elves, orcs, and magic swords.  I’m heading in the opposite direction with my books because Windemere has magic everywhere.  The best way to explain this is that most fantasy worlds have it that wizards are unique to the point where they are awed or feared.  I’ve gone in a direction where they’re rather common and treated more like tradesmen.  It’s more the level of power that gets them attention instead of simply having magic since it’s not a rare resource.  Same goes for monsters that can be found alongside mundane animals.

As for my focus on characters, I use the quest adventure as a backdrop for the interactions between heroes.  Luke Callindor, Nyx, Sari, and the others are young and will evolve as they face their hardships.  So there are scenes where they wonder what happens after their adventures are done or if they’ll even survive their destiny.  Even if they fail in their adventure, the story can continue because I have brought attention to the heroes as fluid beings that will exist after their trials.  I am seeing stories that are more about the character development than the adventure, so this might be a growing trend.

IAN. Do you see writing as a career?

C.Y. Yes.  I’ve wanted to make a career out of writing for the last 19 years.  Wow, I’m old.  This is what I love doing, so if I can make a living that allows me to forge my stories every day then I’d be very happy.

IAN. Is there anything you find particularly challenging in your writing?

C.Y. I write with an ensemble cast of characters, so one of the big challenges is making sure everyone gets some ‘screen time’.  This becomes very difficult in conversations because I’m having to balance 6-7 voices at the same time.  So I need to find balances or give some characters a reason to not be involved even if they’re in the scene.

Another challenge stems from my use of present tense.  As stated, I can’t show history like other fantasy books that use blocks of exposition.  In my style, it comes off very much like a clumsy info dump.  This means I have to be precise in the historical information that I give in narration.  Another method is to have characters explain things in dialogue since it isn’t always a given that the heroes know the origin of everything they’re facing.  This does result in me having to leave some of the more whimsical facts out because they’re not relevant to the plot.

IAN. Who designed the covers?

C.Y. All covers for Legends of Windemere are done by Jason Pedersen.  He’s very talented and I’m thankful that he’s willing to help me out.

IAN. Do you have any advice for other writers?

CY. Keep on writing and always make it fun.  Never let anyone tell you that it’s a waste of time.  Just keep pushing forward and cherish even the small victories like finishing a first draft or surviving your first editing run.

IAN. What were the challenges (research, literary, psychological, and logistical) in bringing it to life?

C.Y. The biggest challenges with the latest book were consistency and continuity.  I use a lot of foreshadowing, so I have to repeatedly go back to research my previous work.  A slip of a character’s behavior or a mistake in preexisting information can snap a reader out of the story.  All of the quirks, actions scenes, descriptions, and whatever else I use to bring the book to life can be easily undone by an error in one of these two categories.  This has caused me to write slower than when I started because whenever I have a feeling that something is off, I stop to go back through the previous volumes.  Even when I don’t think I made a mistake, I’ll go back to check at the end of the day.  Better safe than sorry because many readers will pounce on every mistake.

IAN. Tell us about your next book or a work in progress. Is it a sequel or a stand-alone?

CY. My next book is entitled Legends of Windemere: The Compass Key.  This is the 5th book of my fantasy series and it definitely has more action than the previous volumes.  A lot of the storylines and rivalries that have been established will come to a head in this book to make way for new villains and the revelation of the heroes’ true quest.  One could say that this is where the series takes a more serious and slightly darker tone because the characters will be pushed to their physical and mental limits.

One of my favorite things about The Compass Key is that I got to create a lot of new monsters for many of the battles.  I’ve always enjoyed creature creation in fantasy, so this book allowed me to go wild with a few ideas that were previously nothing more than vague notes on a piece of paper.

Posted by William R Potter at 10:17 PM No comments: