Ice on the Grapevine by R.E. Donald 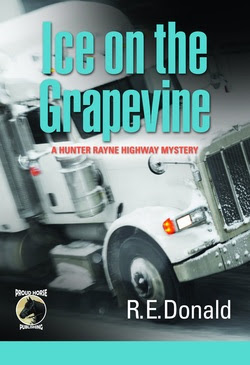 Ice on the Grapevine is a traditional mystery featuring Hunter Rayne, a retired homicide detective turned long haul truck driver. The story opens on a July morning with the discovery of a frozen corpse at a brake check just south of the Grapevine Pass in L.A. County. Hunter, who is in southern California making a delivery, is persuaded by his irascible dispatcher, Elspeth Watson, to help clear two fellow truck drivers who are arrested for the murder. His job is made more difficult by the fact that the suspects, a newlywed couple, won't speak up in their own defence.

The circumstantial evidence is strong, and a rookie detective from the L.A. County Sheriff's Department is eager to score a win. The investigation crosses the Canada-U.S. border when the victim is identified as a second rate musician from Vancouver, and it turns out there were more than a few desperate people happy to see him dead, including the accused couple. Hunter has to use all his investigative skills to uncover the truth.

Hunter’s ex-wife maintains that by taking to the highway Hunter is running away from his past, but he believes that the solitude of days on the road is helping him to heal from guilt over the failure of his marriage and the suicide of his best friend. His life gets more complicated when he feels an unwelcome attraction for a lawyer representing one of the accused.

Tangled relationships and multiple suspects emerge throughout the novel, as Hunter butts heads with more than one officer of the law to solve the crime. Amazon

R.E. Donald is the author of the Hunter Rayne highway mystery series. Ruth worked in the transportation industry in various capacities from 1972 until 2001, and draws on her own experiences, as well as those of her late husband, Jim Donald, in creating the characters and situations in her novels.

Ruth attended the University of British Columbia in Vancouver, B.C., where she studied languages (Russian, French and German) and creative writing to obtain a Bachelor of Arts degree.

She currently lives on a small farm in Langley, B.C., where she and her partner, Gilbert Roy, enjoy their Canadian Horses (Le Cheval Canadien) and other animals.

Ice on the Grapevine and two hundred other indie published ebooks are included in the IAN Christmas Kindle Fire Giveaway! For contest info and to enter to win a Kindle Fire HD 8.9 CLICK HERE