Surviving the Fall by William Potter 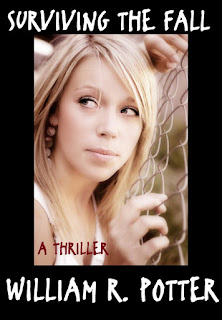 "Surviving the Fall” is a homerun with emotional ups and downs that had me on the edge of seat. It was scary, lustful, and tender, as the plot pushed the ethical envelop of underage sexuality.
Okay, so what is the story about? It is the story of two lonely and needy people that find each other, find true love and compassion, in a perverse and evil world.
James Goodal, love the pun by the way, is a software programmer. His wife has left him, left him the house and a closet full of her cloths that she will never claim. James is lonely. He has a big heart and a lot of love to give. When James was a child he collected displaced animals and cared for them, nursed them back to health.
It was no surprise that when James saw Ashley Metcalf tossed from a moving car into the middle of the street that he had to help her.
Ashley is a complicated, oversexed fifteen-year old. Ashley has been a prostitute since her mother tricked her out when turned ten. So, it is no wonder that she is afraid to trust James and except his help. However, she gets into even more trouble that sends her to live in James’ guest house to the shock and disgust of James’ sister.
James and Ashley’s relationship is a rocky one. James is very frank with Ashley that she is underage; he only wants to help her get back on her feet. However, James sees Ashley as a sexual creature that has had more experience that he ever will. Meanwhile, Ashley can not except that he doesn’t want her. She sees how he looks at her. She wants to give him what she has; what every man she has ever known wants from her. For the first time in her life she wants to have sex with someone. The tension created between these two well written characters is the stuff of great literature. by Aaron M. Wilson Soullessmachine.com
* * *
Surviving the Fall is a heart-warming tale of a wayward teenage prostitute and a gentleman with a rescuer complex. It's a great, intertwined plot where all the characters come together, in the same spirit of the Academy Award winning movie, Crash. Potter showcases his writing talent with skillful interspersing of critical backstory in such a way as to avoid slowing the plot. I urge you to take note of the writer's talent for character development and I'm sure you'll be impressed. In fact, I shouldn't think it'd be long before a major publishing house snaps Mr. Potter up because he belongs on the bookshelves with the likes of Jeffery Deaver and Peter Abrahams. Highly recommended by reviewer: Jan Evan Whitford, Allbooks Reviews.
Available at Smashwords.com