Although writing fiction is her first love, Roxanne has a Ph.D. in engineering, and an MBA from the State University of New York. She received awards for her work from companies such as GE. In addition, she is an inventor with three patents. She served as an executive and senior manager for high-level operations and quality design in the aerospace, defense, industrial, and energy sectors.

Roxanne and her family live in New York State. She wakes up every day with a sense of gratitude for the country that welcomed her, and pride for her two adult sons and their accomplishments.

Roxanne Von Andrian: My book DECEPTION is about a team of four European 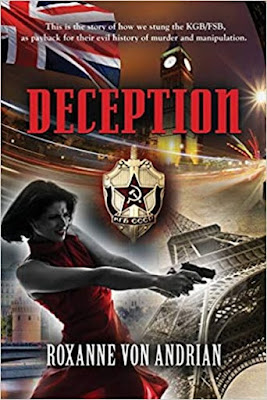 operatives and INGRID, a CIA agent, who plot to steal enriched plutonium to poison an ex-KGB officer in London.

These four men, OSCAR, FERENCZ, ADI and CORNEL, under the Ceausescu’s Romania, had powerful roles in the political apparatchik. During the 1989 revolution, they turned against the communist regime. They meet again, as members of the Miklos Fund Board, in Bucharest Romania.

MIKLOS, an American multi-millionaire with Eastern European roots, opens the Miklos Fund to help the emergence of a civil society.

The team diverts money from the Miklos Fund to finance their plan of stealing enriched plutonium from the Russia-owned military base of Ukraine’s Sebastopol.

The team is acting under the guidance of a French op team who, with help from Italian assassins, plot to kill an ex-KGB officer in London by poisoning him. They make the assassination appear to be executed by the KGB.

While working at MIKLOS Fund, Ingrid has several brushes with death.

The theft is orchestrated by a Ukrainian officer, LISA, who wanted to escape from Ukraine to start a new life in Romania’s Transylvania. The plutonium is hidden in three decoy tombstones made of cement.

IAN: Is Deception published in print, e-book or both?

Roxanne Von Andrian: DECEPTION is published in print, hardcover and paperback, and e-book. I recommend all versions; the quality of the print is very good, thanks to my well organized and perfectionist publisher Angela Hoy, and the cover illustration is wonderfully creative and representative of the content. I was lucky to have an amazing artist like Todd Engel to illustrate the cover!

IAN: Where can we go to buy Deception?

Roxanne Von Andrian: DECEPTION is available for purchase at:

IAN: What inspired you to write Deception?

Roxanne Von Andrian: My inner knowledge of life under the communists and later on, in France, before arriving to the United States, inspired me to write this spy thriller.

I am descending from a well-connected European family. While my family at large was victimized by the communist party and the KGB, part of my close family had the privileged life of those serving the communist regime, in the pattern of the victims embracing its tormentors. Such that, through family and friends, I was privy to deep state secrets that were occasionally spilled in my parents’ house.

I joined the Revolution of December 1989, which ended with the ousting of the dictator, Ceausescu, the collapse of communism, and the rebirth of democracy. My change of allegiance wasn’t left unnoticed. In 1992, I was working for the Soros Foundation for an Open Society when I asked for political asylum in Paris, France, because my life was in danger. My family and I moved from France to United States shortly after that.

I was an ocean away when European events made the news, like the assassination of Ipsinenko in London, Russia’s grab of Crimea, enriched plutonium popping up on the European black market, and the emancipation of the Eastern European countries out of Moscow’s communist control. I immediately connected these and other events to people I personally knew, the organizations they were part of, and to their years-long strife and hate of the Soviet Union and the KGB, the ideology enforcer. I realized that the public would never unlock the deepest secrets and the tenebrous characters that were behind these events. Why? – because the people I knew in my youth were so secretive and masters of deception and conspiracy, nothing in the world, neither riches or fame, would drag them out in the open.

IAN: How long did it take to write Deception?

Roxanne Von Andrian: I started writing the manuscript in 2017 and had it published in 2020. I wrote it during evenings, after a full-day work, and on weekends.

Roxanne Von Andrian: Its original title was “The Last Take”. I changed the title in 2018, after I had several discussions with Rhonda Roaring, an amazing personality and editor who peppered my manuscript with critiques of style and content, and ended up giving me a lot of titbits on writing and publishing advice. She told me the title sounded like a financial transaction, and I should consider a different one.

IAN: What do you hope your readers come away with after reading Deception?

Roxanne Von Andrian: My hope is that the readers will connect the dots between the real events the book is based on, and they will see the hidden truths behind each history lesson.  What is more fascinating than having a glimpse of the secrets under a history shakedown? – it’s like trying to see the entire iceberg when they show you the tip of it only.

My literary agent, Mary Ellen Gavin, who I trust and love, says that my book gives the readers insight into what it would be like to work at CIA Headquarters and what it was like at the end of the COLD WAR.

Roxanne Von Andrian: My book Deception is based on characters I knew and on events in my own life. Most of the dialogues are documenting conversations I witnessed, while I was in the company of strongly minded, driven men and women, in my youth and childhood, who remained memorable over time, in my head.

While writing the manuscript, I cried many times, because of remembering the emotions, the suffering, or the risks taken by people who were so close to me. When the manuscript was complete, it felt therapeutic. Reliving the vivid memories, which I associated with the fictional deflections of the story, healed me somehow of the fears and terrors of my life in a dictatorship.
IAN: Tell us about your next book or a work in progress. Is it a sequel or a stand-alone?

Roxanne Von Andrian: My next book is in a different genre than spy thrillers, and yes it is a stand-alone. I am planning to write a story of the paranormal. About the personal dilemma and tribulations of a woman who believes in God and develops supernatural powers, which give her gratification when accomplishing good deeds or “miracles” for unknowing people, but sometimes put her at odds with herself when people want to harm her.

Posted by William R Potter at 8:02 AM