British author from Windsor, home of Windsor Castle. Currently live in the Netherlands, working on the third book in my dystopian, science fiction series, VanWest The Future. The second book, VanWest The Present, is coming out on the 30th of July, 2020.

IAN: Please tell us about your latest book.
Kenneth Thomas: The Past is the first book in the VanWest series, about an Enforcer who lives in a dystopian Earth of the year 3000 and works for an authoritarian ruler called the Universal Council. Tasked with travelling through time to stop a renegade sect, that seeks to change Earth’s past, he comes to learn about his dark origins and his unique ability.

Falling in love with the daughter of its leader, Mad Newton, he returns to the present to face a 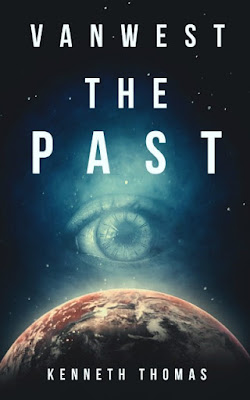 difficult choice, whether or not to save her. And be part of the New Beginning.

IAN: Is VanWest The Past published in print, e-book or both?

Kenneth Thomas: Available in both.

IAN: Where can we go to buy VanWest The Past?

IAN: What inspired you to write VanWest The Past?

Kenneth Thomas: The concept for the first book originated in 2012 when green issues such as climate change were slowly becoming more talked about (pre-Greta Thunberg). VanWest, set in the year 3000, is a reflection of a world where we have not protect our home, planet Earth; and looks at the consequences, the effect on society, such as forced migration, food shortages, loss of flora and fauna, authoritative regimes and wealthy individuals (oligarchs) who take advantage.

Beyond that, I wanted to write a book with broad appeal; most importantly, one that was entertaining. Working in the movie industry on blockbuster releases for a couple of years, including 20th Century Fox and MGM Studios, I yearned to create something too that thrilled and got everyone excited. Without a movie studio’s budget, I thought a great way to achieve this was through writing; from a screenplay, it developed into a book.

IAN: How long did it take to write VanWest The Past?

Kenneth Thomas: I wrote the outline of my story in my mid-20s, nearly 8 years ago. With work commitments and trying to get onto (and stay on) the career ladder, I left it until recent year, only returning sporadically in-between, mainly to edit. The first book in the series has a lot of historical fiction, and I wanted to get the details right, whilst having an engaging, fast-flowing books, with a focus on conveying the emotions of the characters and settings.

Kenneth Thomas: In VanWest, the style is fast-flowing, with quite a bit of dialogue from the characters. I decided to write the first edition in British English (there are a few different grammar and spelling rules to American English). Being British, I felt it was more authentic to write in this style, for the first edition at least.

Kenneth Thomas: I think this 5-star rating from Readers’ Favorite, K.C. Finn, sums it up best:
Excerpt: Author Kenneth Thomas presents a stylish and solidly built science fiction work with plenty for fans of hard sci-fi and dystopia to get their teeth into. There is also a great deal of drama and emotional involvement throughout the plot, which makes for a well-rounded read and helps to place the characters realistically in their fantastical setting. One of the things which I particularly enjoyed about the tale was a blending of new futuristic science fiction with classic sci-fi ideas from the past, which were meshed really well by the 1950s setting. As we visit many familiar places and times in Earth’s recent past, so realism and surrealism blend to perfection: we are in safe hands with a capable narrator who holds the story together well.

Kenneth Thomas: Great writer’s voice is one feedback I have received, that my characters are multi-dimensional and that there are multiple leads. This book is an emotional journey as much as anything else, you feel the chapters and the settings, a full range including excitement, suspense, fright, intrigue, happiness. This is not a typical science fiction book.

Kenneth Thomas: Elementi Studio designed my covers from The Past and The Present. I did an outline sketch and she brought it to life. I dare to say that The Past is the best cover design of 2020. Note the elements, the eye looking at our future dystopian Earth, eye numerals for time-travel to return to the past, hidden secret hint – the eye also relates to a character in the book. Elementi did an amazing job.

IAN: Did you learn anything from writing VanWest The Past and what was it?

Kenneth Thomas: There is a lot of Historical fiction in first book, the Utopians seek to change the past, targeting the creation of CERN, ISS launch, there is also details on British territories and history, as well as technologies, such as power generators.

Kenneth Thomas: I’m still learning… If self-publishing, spend the time researching items such as your book cover and look at a few providers. The synopsis and book cover will be amongst the first items your potential reader will look at, so do not rush this.

IAN: What were the challenges (research, literary, psychological, and logistical) in bringing it to life?

Kenneth Thomas: Two items I spent the most time on, emotion and historic settings. With each chapter, I try to capture the emotion and where applicable build the suspense. You can really read and feel VanWest’s journey, and that of other characters in the book. It seems everyone’s favourite chapters are those set in 1950s Paris, where VanWest moves from the futuristic setting of the year 3000 to travel back in time to stop a renegade sect. I spent a lot of time to get the details and feelings right. I did this also for 1998 Florida.

Kenneth Thomas: The Present is the second book in the VanWest series. To defeat the Universal Council, VanWest is made to confront his dark past. Uncovering Mars’s many secrets and the coming together of Earth’s main opposition groups could prove pivotal in defeating the Council’s mighty Space Army. However, success is not what it appears, for there’s a twist that he could not foresee. Out end of July 2020.