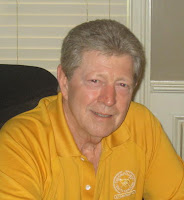 John W. Huffman talks about his latest novel and how a journal he kept during his combat tour of duty in in 1966-67 became an award winning novel in 2011.

John enlisted in the Army Airborne in 1966 and served two tours of combat duty in Vietnam, the first as a private, and subsequently a sergeant, with Alpha Company, 1/27th Infantry, 25th Infantry Division, in 1966-67, the second as an officer/aviator with the 120th Aviation Company in 1972-73. He retired as a major in 1986 with three Purple Hearts, three Bronze Stars, sixteen Air Medals, one Army Commendation Medal, two Vietnamese Cross of Gallantry Medals, and various other service and campaign ribbons.

Upon retiring from the military, John launched a real estate sales and management company, SouthCorp Properties, Inc., which he still owns and operates today. He previously owned and operated seven speedways in five states, created an automobile racing and sanctioning body, the American Racing Association, and developed three touring series.

JH. America’s Diplomats powerfully portrays the conflict’s initial phase when patriotism still reigned supreme. All wars spawn simple heroes from youthful naivety as boy-soldiers evolve into weathered combat veterans. Young Jay Sharpe is no exception. Born into a long lineage of patriots, he never questions his generation’s call to arms. Filled with wanderlust and rarely sure of what he wants, but knowing precisely what he does not want, a predictable marriage to his high school sweetheart and looming job at the local sawmill in his small hometown after graduation, he gallops off to the nearest Army recruiter to become Private John Joseph Sharpe, All-American hero. After rigorous training, he emerges as one of the Army’s elite paratroopers and eagerly sails off to and the golden opportunities awaiting him there—a near fatal encounter with the 9th North Vietnamese “Ghost” Regiment in the legendary battle of , the largest land engagement of the entire war effort. His gripping tale of the trials of a soldier in our nation’s most controversial confrontation is a graphic chronicle of love, hate, hope, and despair in an era of uncertainty and misdirection.

IAN. How long did it take to write the book?

JH. I wrote the first draft of this novel as a memoir and rewrote it in 2010 as Military Fiction.

IAN. What inspired you to write America’s Diplomats?

JH. There were two reasons I wanted to write this book. First, for my son, and second, to honor the men I served with. was the largest ground battle of the Vietnam war and my company played a key part in it, which was all but covered up in the official army after action reports, which can be read on Wikepedia. I encourage you to read that after action report on the Battle of Attleboro before you read ’s Diplomats, and then reread it after you finish reading the novel.

JH. I write almost every day, starting early in the morning and finishing when I am tired or run out of words. Sometimes I write two or three hours, at others ten or twelve hours.

JH. It portrays a side of that has never been written about from the eyes of a private serving in combat.

IAN. Is your book published in print, e-book or both?

JH. It is in paperback , Kindle, Nook, and all other ebook formats.

IAN. What do you hope your readers come away with after reading America’s Diplomats?

JH. A very real perspective of and the American soldiers who fought there.

IAN. Where can we go to buy your book?

IAN. Tell us about your next book or a work in progress.

JH. I am currently putting the finishing touches on Searching For Leah, which is a love story about a witch and a race car driver.

’s Diplomats, The Road To Attleboro by John W. Huffman

In the five hundred years following the Burning Times, the colorful members of Council have attempted to govern their Craft, once the most powerful religion on earth, with their twelve individual tribal members while they await the enlightened one, a thirteenth member who holds genetic links to each of the twelve tribes. Forced to practice their craft in secrecy due to the persecution and false accusations of other religions until the modern era, they are now viewed as something of an amusing oddity, if not outright lunatics, by society in general. By chance, they discover Clint Long, a rakish, devil-may-care racecar driver who carries eleven of the genetic links and Council hastily adapts a somewhat dubious plan to gather his seed to complete the long sought after twelfth linkage. In this noble quest, they select Leah as the vessel to bear his child, a young, beautiful maiden raised in the swamps of and home-schooled by her mother with virtually no contact with the outside world. When Leah’s ancient godmother mistakenly casts a love spell in addition to the sanctioned spell of lust, what follows is a hilarious, heartwarming adventure as Clint whisks Leah out of her protected environment into his fast-paced, problematic world while the Council valiantly tries to keep up and subtly influence the outcome.

Posted by William R Potter at 8:04 AM