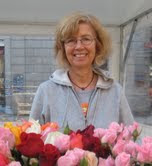 Christa Polkinhorn, originally from Switzerland, lives and works as writer and translator in Santa Monica, California. She divides her time between the United States and Switzerland and has strong ties to both countries. The tension and excitement this "double life" creates informs her work. Among her many interests, aside from writing, are traveling, studying foreign languages and cultures, drawing and painting, meeting people and forming friendships.

Love of a Stonemason

Karla Bocelli’s early life is marred by death. At five years of age, she loses her mother in a car crash in Switzerland. Her father lives at the other end of the world and her aunt and guardian passed away the year before. Now, at age twenty-four, the young painter almost gets hit by a speeding car. As if this wasn’t fateful enough, the driver turns out to be a carver of tombstones. Andreas, however, is anything but morbid. Quick-tempered and intense, he exudes a rough-and-tumble energy. After an initial stormy encounter, Karla comes to see in Andreas the “rock in her life,” the perfect antidote to her fears of abandonment. Andreas, however, wrestles with his own ghosts of the past. Together, the two artists must confront the demons that haunt them.
Love of a Stonemason is a story about the struggle of two artists with their past, their family, their creativity, and their love for each other. Told from the point of view of Karla, it depicts the world through her painter’s sensibility. It takes the reader on a journey full of sights, smells, tastes, and sounds from the south of Switzerland to Italy and the Peruvian Andes.
Available in Print and Kindle at Amazon.com
Available in Print and NOOK at Barnes&Noble.com
Posted by William R Potter at 9:56 AM

Email ThisBlogThis!Share to TwitterShare to FacebookShare to Pinterest
Labels: Christa Polkinhorn, Love of a Stonemason, Path of Fire, Saturday Spotlight