The Girl Who Swam to Atlantis is a Y.A. Historical Fiction Novel by Elle Thornton 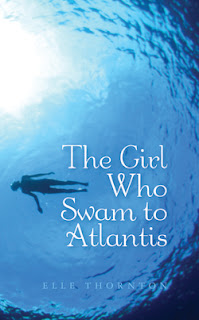 Nearly everything important in twelve-year-old Gabriella’s life that summer of 1957 can be traced to the river. On the North Carolina military base where she lives, she meets the African-American Marine Hawkins by the river’s brown-green water. When her father, the general, treats her as if she doesn’t exist, Gabriella’s determined to show him she’s good at something: she’ll learn to swim. And it’s the river with its mysterious worlds that leads to her mother, even though she doesn’t want to be found.At the river, Gabriella discovers Hawkins is far more than a servant in the kitchen of her father’s quarters. He becomes her swim coach and a person she can talk with—even about the tragedy of the youth Emmett Till. The fourteen-year-old was lynched two years earlier, his body thrown into Mississippi’s Tallahatchie river. But this river, her river, isn’t a place of death. Emmett’s spirit is alive in its waters. It’s a place of magic.At the river she works with Hawkins on her swimming so she can enter a competition and make her father proud. Then maybe the general won’t send her north to school for another lonely year. At the river Hawkins helps her find her strength. Emmett helps her find her heart.Emmett had been murdered for whistling at a white woman. Could her friendship with Hawkins endanger the tough Marine? It doesn’t seem possible. Until a sudden storm on the river changes Gabriella’s life—forever. FREE at Amazon September 17, 18, & 19

I grew up on military bases in the south and west of the 1950s. And it still feels like I’m really home when I’m around airfields, parade grounds, barracks, Quonset huts, the PX, and folks in uniform.This background has found its way into my first historical fiction novel, Swimming to Atlantis. The story tells how the murdered youth Emmett Till comes to life in twelve-year-old Gabriella’s heart that summer of 1957, when the African-American Marine Hawkins teaches her to swim in a North Carolina river. I’ve been fortunate to work with some fine reporters and editors who taught me to write news stories. After leaving the news business, I became a technical writer for a major computer company and later a marketing writer for still another international corporation. Journalism taught me to write under tremendous pressure and to feel comfortable with words. Working with engineers as a technical writing taught me the importance of clarity. I valued all that I’d learned, but something was missing. Since grade school, I’d loved books and poetry. So when I had the opportunity, I earned a graduate degree in English and began to study and write poetry and fiction along with teaching. To date, some of my poetry has been published in small journals. The adventure of becoming a YA novelist is unfolding with the publication of The Girl Who Swam to Atlantis.