DEAD of KNIGHT by William R. Potter for Sample Sunday 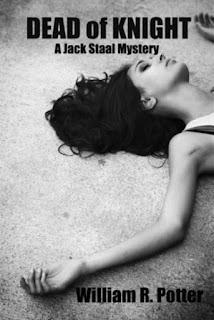 1000 words from Dead of Knight by William R. Potter

Jack Staal lay in his bed, propped against the headboard. He held a half finished Scotch neat in his left hand. He didn’t normally take a drink to bed, but lately he’d had trouble sleeping. In his lap were numerous photos and 3x5 index cards with notes and bits of information about what he was beginning to think might turn out to be the most important case in his twenty years on the job.

Two women violently raped and murdered on their birthdays. The media, mayor’s office, Chief Constable and the public were all buzzing about a serial killer in Hanson and the department’s lack of progress. He glanced at the cards.

Stephanie MacKay, 32, found in , ambushed while jogging, brutally assaulted and left for dead on March twenty-third. Gabriella Haywood, 31, a realtor, found dead nine days later in the basement of a townhouse she was supposed to be showing. Research had turned up no link connecting the two women. Clues, tips, trace evidence, and leads went nowhere.

Staal tossed the file folder aside and shook his head when he realized how much time he had spent on the cards. The case was not officially his. Just minutes after he responded to the first victim, Max Barnes—the Staff Sergeant in charge of the Criminal Investigations Branch of the Hanson Police Service had called in the Integrated Homicide Investigation Team.

The IHIT combined the skills of homicide specialists from the RCMP’s “E” Division with those of the experienced detectives from local law enforcements agencies. They were in charge of working homicides, attempted murders and all unexplained deaths across Metropolitan Vancouver.

Staal’s former partner, Lesley Degarmo, had been assigned to one of the seven IHIT teams only five months earlier. She was the one who had kept him up to date with the case, going so far as to e-mail him copies of the case files.

Analysis done on footprints at the park scene revealed that the killer probably stood around five foot eight, weighed 150 pounds, and was perhaps a teenager. In the house where Haywood died toys had been scattered around the children’s bedrooms, presumably played with by the suspect. When that bit of information had leaked out, the press had instantly dubbed the murderer “Birthday Boy.” Now it was June 29. Almost three months had passed since the last victim’s death. Experience and his gut told him the killer would strike again, and the waiting made him uneasy.

Lying next to Staal was Gina Hayes She had fallen asleep shortly after their lovemaking, and neither his restlessness nor the rustle of his paperwork seemed to disturb her. He’d worked with Hayes for almost two years, but her muscular, athletic body still excited him. He could get lost in her deep brown eyes, and he marveled at how beautiful she was, even when asleep. She was a cop, not Staal’s partner; however they were both assigned to the Major Crimes Section and worked closely.

Gina held a black belt in Karate, and when she expressed an interest in boxing professionally, Staal had volunteered to train her. She accepted. Long hours in the gym had moved their relationship quickly from colleagues to good friends, and now Gina spent most nights at his place.

Gilbert, an aging black tabby, lay at the foot of the bed. The feline had kept him company on many late nights as he mulled over difficult cases. Staal set his drink on the side table, slid the cards into the drawer, and slid further under the covers.

“Go to sleep, old man,” he whispered to Gilbert. He closed his eyes and drifted off thinking of the way Gina had smiled down at him as they’d made love.

Staal struggled against the dream, thrashing as if he could prevent the vision from stirring in his brain. He saw a children’s playground surrounded by dense bushes and evergreen trees. A man lay dead near the swings.

A young woman begged him to save her daughter as the child died. A man cradled a limp arm and screamed as he ran.

Staal looked beyond him to see dozens, then hundreds of tiny faceless forms. Some of the injured struggled in agony, while others were as motionless as mannequins.

“Jesus Christ!” He bolted upright and took a deep breath. He sat hugging his knees. The wall clock thumped steadily and Gilbert’s purr sounded like a diesel engine.

Gina put her hand on his shoulder. “Jack, what’s wrong?”

“Just a damn dream.” He reached for the cocktail glass on the night table and swallowed the last sip.

He glanced at Gina. She smiled and sat up in bed beside him.

“Dream? About the shooting?” She ran her fingers up and down his leg.

“It’s been a while since the last one?” Gina asked.

Staal often wondered what Gina saw in him. He wasn’t the best looking guy around. At forty-two; he was still in good shape despite the recent adding of over twenty pounds to his normal 200. The job and over a hundred amateur and twenty-six professional boxing matches had left him with his share of scars and blemishes, and a nose that had obviously been broken more than once. She didn’t seem to mind.

He slipped out of bed and headed for the kitchen where he poured himself a shot of whiskey. He downed it in one long swallow, shuddering as it burned his throat. Too bad it did little to calm his trembling hands. He fumbled to light a cigarette, inhaled deeply and blew nine months of surviving without nicotine.

Staal stared at the calendar. “Shit, thirteen straight nights, that God-damn dream!” He shook his head and poured another shot.

Jack hated stereotypes, especially cop stereotypes. He struggled against the overweight, doughnut chomping, two-pack-a-day habit, bottle-of-hooch-in-the-desk-drawer cliché. The cop dinosaur so often played on television by Dennis Franz. He looked at the glass in right hand, the cigarette smoldering in his left and shook his head.

“Have you been keeping your appointments with Dr. Connelly lately?” Gina asked.

Jack poured himself a glass of ice-water and moved into the living room where he slumped in his Lay-z-boy. “Missed the last two.”

“You’re gonna hear about it from Barnes.”

He had never known Gina to nag or push. This time was no exception. She kissed him on the cheek and left him alone.

Staal didn’t have time for therapists, didn’t believe in their ability to help him, and hated talking about his personal stuff. He preferred to go it alone. He remembered his first visit with Dr. Janet Connelly, Hanson Police Service’s Staff Psychologist. His career as a cop was on the rocks; his superiors at the Vancouver Police Department had removed him from the street after failed stints in the Auto-Theft unit and Vice, and set him behind a desk. Then an opportunity with the Hanson surfaced.

Available in Print and Kindle at Amazon.com

Available in Multiple e-book formats at Smashwords for only $2.95!

Posted by William R Potter at 8:32 AM