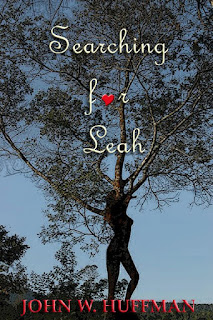 John W. Huffman has published his seventh novel, Searching For Leah, available in print and Kindle format at Amazon.com and in Nook format at Barnes & Noble. Autographed copies of his books can be ordered from his website,www.johnwhuffman.com
Searching For Leah: Clint Long, desperately seeking a sponsor for his race team, impulsively stops by an old mystic to have his fortune read and unwittingly sparks a euphoric reaction when she discovers he by chance has eleven direct genetic links to their twelve sacred tribes, which the governing Council of their Craft has been trying to forge for over five thousand years. Unbeknownst to him, the colorful members of Council hastily adapt a plan to gather his seed within a maiden from the remaining twelfth tribe, whose newborn persona is destined by the ancient ones to usher in a new age of enlightenment for all mankind. For this noble quest, they select Leah as the vessel to bear his child, a naïve young woman raised in the swamps of Louisiana and home-schooled by her mother with virtually no contact with the outside world. When Leah’s godmother mistakenly casts a love spell, Clint whisks Leah out of her protected environment into his fast-paced world while Council valiantly tries to keep up and subtly protect the unborn child.
John W. Huffman’s next book signing is at Java Nook Books in Ridgeway, South Carolina on October 8, 2011 from 6:00pm - 8:00pm.
John was born in Hemphill, Texas, attended elementary school in Pineland, Texas, junior high and high school in Jasper, Texas, and graduated summa cum laude from Embry Riddle Aeronautical University. He enlisted in the Army Airborne in 1966 and served two tours of combat duty in Vietnam before retiring from the Army as a Major in 1986, and launching a real estate sales and management company, SouthCorp Properties, Inc., which he still owns and operates today. John has co-written numerous magazine articles and two short stories, The Reincarnate and The Mad Dash, along with his six other published novels, A Wayward Wind, a finalist in the regional fiction category of the 2010 Next Generation Indie Book Awards, Tiger Woman, the winner in the action/adventure category of the 2010 Next Generation Indie Book Awards, The Baron of Clayhill, a finalist in the popular fiction category of the 2010 National Indie Excellence Book Awards, Above All, a finalist in the action/adventure category of the 2011 Next Generation Indie Book Awards, Cold Hearts Burning, and America's Diplomats, The Road to Attleboro, a first place winner in the military fiction category of the 2011 National Indie Excellence Awards.
John has one other novel awaiting publication, Eyes of the Blind, and is currently working on When A Rebel Comes Home.
John resides in Blythewood, South Carolina, with his wife Misty, and has three grown sons and three granddaughters.
Amazon.com
Posted by William R Potter at 4:34 PM